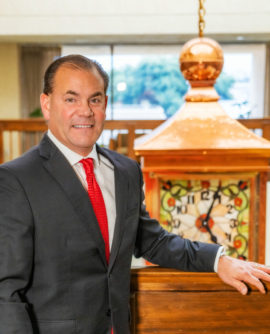 Steve Fryar is the president of P F & E Oil Company. He is on the Board of Directors of Citizens National Bank and the owner of Southside Joint Venture, a real estate holding company.

Raised in Brownwood, Fryar has been involved in his family’s oil and fuel business since 1980.  PF&E Oil Company also owned and operated several Food Plaza convenience stores in the Central Texas Area before selling off their retail segment in 2018 and sold and distributed fuel to their dealer network of convenience stores. He has also had an interest in Fryar Cattle Company.

In February 2002, Governor Rick Perry appointed Fryar to the Board of the Texas Youth Commission and then reappointed him in July 2006.  He is also a former Republican nominee for State Representative and continues to stay active in politics and volunteer his time on several boards and committees. Vice President For The Texas Food & Fuel Association, Legislative Committee Member For The Texas Food & Fuel Association, The Brown County United Way, Brownwood Area Chamber of Commerce Board of Directors, Brownwood Country Club Board of Directors, Brownwood Independent School District Facilities Committee, Coggin Elementary School Campus Improvement Team, Brownwood Community Advisory Council for the Benefit of TYC Youth and past President of the Brownwood Kiwanis Club.

Fryar and his wife, Dianne, reside in Brownwood, Texas. They have five children and three grandchildren.