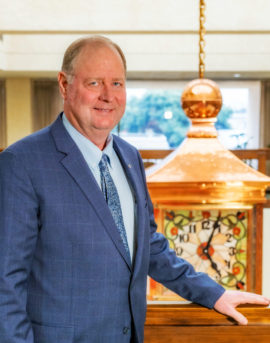 John Guest was born to William C. (Bill) Guest and Laura Jean Nielsen Guest in Abilene; TX. He grew up there and participated in Boy Scouts, American Junior Rodeo Association, and was a member of the First Central Presbyterian Church. Upon graduation from Abilene High School, he attended Cisco Junior College on a rodeo scholarship and graduated with an Associate of Arts Degree. Next he attended Tarleton State University and graduated with a Bachelor of Science degree in Ag Business. He also received a post-graduate degree from Southwestern Graduate School of Banking in 1990. John moved to Brownwood, TX in 1979 and worked for the Farmers’ Home Administration. In 1980 he married Jan May Guest and they made their home in Brown County. John went to work for Citizens National Bank in 1982. He became President and was elected to the board of CNB in 2010. In 2014 he was named Chief Executive Officer and has remained in that capacity with the bank to date. John and Jan have one daughter, Jacey Elizabeth Guest, who has graduated with a Master of Science in Finance degree from Rawls College of Business at Texas Tech University. She is currently employed at Lone Star Ag in Fort Worth, TX. John has served the Brown County community in many ways throughout his years here. He is a member of the Kiwanis Club of the Pecan Valley and has served on numerous boards, including the Brown County Fair Association where he was Chairman of the Rodeo Committee for several years. He also is currently serving on the Brownwood Industrial Foundation, the West Texas Rehabilitation Center Board, and the Zephyr Water Board.