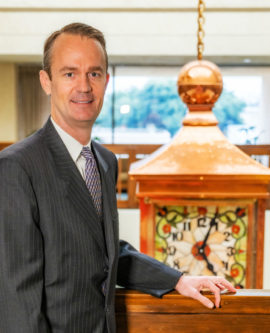 Tim was born in Brownwood, Texas and grew up in Austin, Texas. He played tennis at Westlake High School and Baylor University. He earned his BBA at Baylor University while majoring in Finance and Economics. Tim graduated from Baylor Law School and is licensed to practice law in the State of Texas.

After law school, Tim worked as an Attorney for Brown McCarroll and Oaks Hartline in Austin, Texas. It was during this time, he realized his real passion was investments. In 2001, Tim decided to leave the legal world and join UBS as a Financial Advisor. He worked for UBS for approximately four years and then for Raymond James for over 12 years. Tim also serves as a Director at Citizens National Bank in Brownwood, Texas. He has served as a Director at Citizens for over eight years.
Tim joined FMP Wealth Advisers in 2018. He moved his practice from Raymond James to FMP and is excited to be working with the entire FMP team.

Tim met his wife, Karen, at Baylor University. They have two children, Rachel and Davis. Rachel will be attending Baylor University in the Fall of 2018. Davis attends Middle School in Austin, Texas. Tim enjoys hunting, fishing and playing competitive tennis.